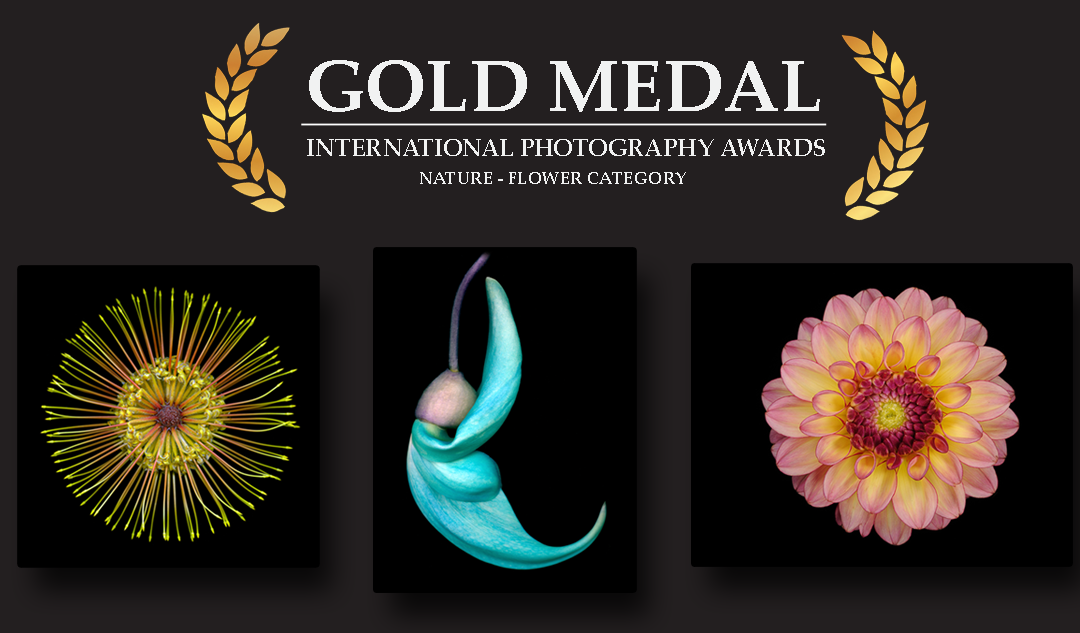 Celebrated photographer David Leaser took top honors for two groundbreaking botanical series at the 2015 International Photography Awards competition in November. Best known for using space-age technology to capture stunning close-ups of rare and exotic flowers, Leaser was awarded a Gold and Silver Medal in the Nature/Flowers category out of thousands of submissions from around the world. These awards mark the second time the International Photography Awards have honored Leaser’s work. His “Nightflowers 1” collection received a Silver Medal in 2013.

Leaser’s “When Darkness Falls in the Garden,” a curated collection of flowers that were photographed at night, was awarded a Gold Medal. This series showcases the nightlife of plants and features many of the jewels of the tropics, including a parrot tulip, protea and orchid. “Blue Moon” is a signature image from this series and features a jade vine native to the Philippines noted for its glowing turquoise hue.

“Art in Nature” won a Silver Medal and focuses on enlarged images that show their artistic form. Some are the size of a fingernail. “Anemone,” a pale pink wind flower, captures the essence of this collection with its elegant blossoms and graceful stems and has roots in Greek and Roman mythology. Other highlights from this series include a dahlia, collector’s orchid and parrot tulip.

With six award-winning collections to his credit, Leaser has been recognized as one of the world’s leading botanical photographers. He uses innovative space-age technology he developed with NASA and Nikon software to layer dozens of photos together and show flowers in a way they have never been seen before. His images show “bee’s eye” close-ups of a flower, highlighting intricate details that traditional photography has been unable to capture until now. Leaser will launch a new collection in Spring 2016. His “Return of the Natives: California Wildflowers” showcases the native plants that once blanketed the mountains, deserts and valleys of Southern California.

Leaser’s artwork has been praised by the art and photographic communities and has been featured in the New York Times, Los Angeles Times, Architectural Digest, Sunset Magazine and Nikon World. He was also awarded Grand Champion in Nature at the Moscow International Foto Awards ’14, and his “Tiger’s Eye” image from the “Nightflowers” series was the only photograph juried for the prestigious London Art Biennale. The Huntington Library in Los Angeles developed an artist series around Leaser’s work and houses 14 of his large-scale images for its permanent collection. Architectural Digest says Leaser’s images “glow with eye-popping color and pattern,” and Ann Landi, contributing editor for ARTNews, says, “Leaser’s work seduces us as only an unforgettable work of art can, to look and look again.”

In addition to his art collections, Leaser has written four botanical books, including two acclaimed photographic essays. He is a featured lecturer at botanical gardens and museums on fine art photography. For more information, visit http://davidleaser.com.
The International Photography Awards, a division of the prestigious Lucie Foundation, is a photography competition that honors the world’s top photographers as well as discovering new and emerging talent and promoting an appreciation of photography. For more information, see http://www.photoawards.com.