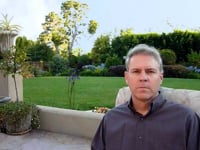 David Leaser creates dramatic images of landscapes and botanicals. His work has appeared in numerous magazines and journals, and he has authored four books, including two photographic monographs. Leaser’s Tropical Gardens of Hawaii and Palm Trees: A Story in Photographs have received critical acclaim; the latter was also featured at the Museum of Photographic Arts in San Diego.

David began taking photos at a young age. He received a Polaroid Swinger camera from his parents at age six, and he has been taking photographs ever since. After completing the photographic essay, Tropical Gardens of Hawaii, Leaser spent a day at the Huntington Library, Art Collections, and Botanical Gardens in California. The Huntington was featuring an exhibit of paintings from Frederic Church, arguably the most successful 19th century American artist. Church’s realistic images of the Andes and Amazon inspired Leaser to travel to South America and retrace his footsteps.

In the Amazon, David studied the details of the small flowers on the rainforest floor. Each small flower contained its own ecosystem for the small insects and reptiles of the Amazon. In the Amazon, he had an epiphany: why not show viewers the most intricate, intimate workings of these tiny flowers?

Upon returning to his studio in Los Angeles, David spent the next few months collecting exotic flowers from around the world to pose as subjects for his new work. Orchids from Asia, bromeliads from the Amazon, gingers from Polynesia . . .

Unfortunately, technology hadn’t caught up with his vision. He wasn’t able to capture the extremely fine detail he wanted to show. After months spent researching, David developed his own process, now being called the dettagli process because it captures detail like you’ve never seen before. You can literally see grains of pollen on the stamens of a hibiscus in the Nightflowers collection. And every flaw in these flowers demonstrates that every beauty has its imperfections.

David is dedicating himself to creating a collection of botanical images that will show viewers the miracle of nature. He believes, after studying his Nightflowers series, viewers will never look at flowers in the same way again.