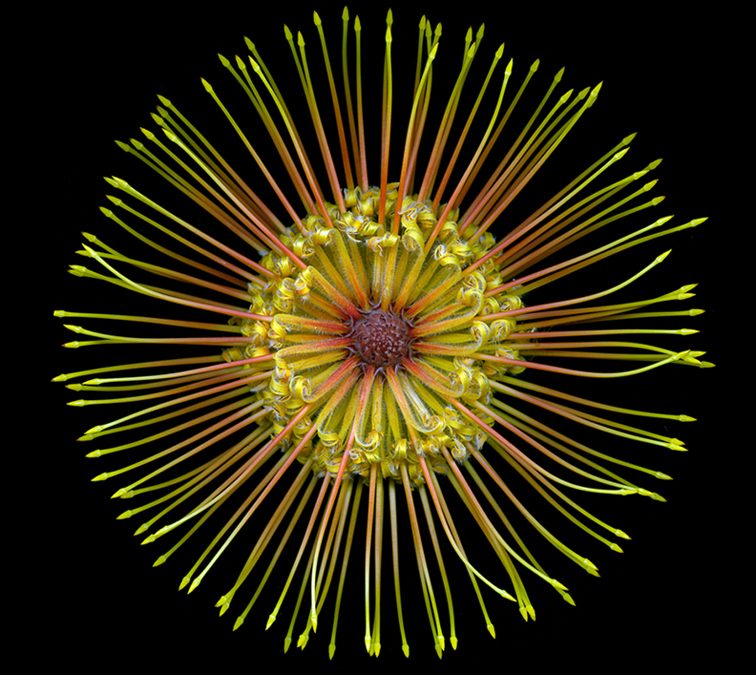 Leaser has been recognized as one of the world’s top botanical photographers who is best known for his large-scale botanical photographs of rare and unusual plants. He uses groundbreaking space-age technology he developed with NASA and Nikon equipment to layer dozens of photos show a closer look at flowers than many have ever seen before. His images reveal “bee’s eye” close-ups of a flower, highlighting intricate details that traditional photography has been unable to capture until now. “It’s like an MRI, where I take a stack of photos and create a composite with incredible detail, almost down to the cellular level,” Leaser says.

Leaser also uses a novel technique to reproduce his work. Using heat and pressure, his images are literally infused right into a sheet of polished aluminum, giving the image a three-dimensional, high-definition look.

The London Art Biennale celebrates contemporary artists from around the world and will showcase Leaser’s “Hokulei” and “Green Hornet” in large-scale polished aluminum. “Hokulei” features an almost otherworldly protea presented dramatically against a black background. One of the oldest flowers on earth, it is reminiscent of an exotic sea creature and has come to symbolize diversity and courage. “Green Hornet,” presents an iridescent green orchid native to tropical America. Both have previously received top honors from the International Photography Awards.

This marks the second time the London Art Biennale has juried Leaser’s work to exhibit.  His “Tiger’s Eye,” an award-winning flowering maple blossom, was the only photograph selected in 2013.

Leaser’s artwork has been praised by the art and photographic communities and has been featured in the New York Times, Los Angeles Times, Architectural Digest, Sunset Magazine and Nikon World. He was recently awarded first place in Flowers and a gold in the overall Nature category at the Tokyo International Foto Awards and received the gold and silver metals from the International Photography Photo awards. The Huntington Library in Los Angeles developed an artist series around Leaser’s work and houses more than a dozen of his large-scale images in its permanent collection.

Architectural Digest says Leaser’s images “glow with eye-popping color and pattern,” and Ann Landi, art critic and founder of Vasari21, says, “Leaser’s work seduces us as only an unforgettable work of art can, to look and look again.”

In addition to his art collections, Leaser has written four botanical books, including two acclaimed photographic essays. He is a featured lecturer at botanical gardens and museums on fine art photography. For more information, visit http://www.davidleaser.com.

The London Art Biennale takes place in Old Chelsea Town Hall, considered London’s artistic center, and will showcase work from 120 artists in 40 countries.  This non-themed event features first-class and emerging artists with works on canvas, sculptures and drawings. Organizers have curated exhibitions at renowned institutions and museums like the Victoria and Albert Museum in London.  For more information, please see http://londonbiennale.co.uk/.